Αρθρα
Refugees deserve action and investment, not indifference and cruelty

The reason for creating a networking culture is obvious once you look at the current [ ... ]

by Ivan Misner   What is business networking anyway? It's more than showing up and shaking hands; it's [ ... ]

These Will Be the World's 20 Largest Economies in 2030

Take a peek at the new world that awaits us

Get ready for a new economic order. In the world 15 years from now, the U.S. will be far less dominant, several emerging markets will catapult into prominence, and some of the largest European economies will be slipping behind.

That's according to the U.S. Department of Agriculture's latest macroeconomic projections that go out to 2030, displayed in the chart below. The U.S. will just barely remain the global leader, with $24.8 trillion in annual output. The gray bar represents the $16.8 trillion gross domestic product projected for 2015, and the green bar shows how much bigger the economy is expected to be 15 years from now. The country, worth 25 percent of the world economy in 2006 and 23 percent in 2015, will see its share decline to 20 percent.

China's GDP will grow to more than twice its size today, helping the Asian powerhouse to almost entirely close its gap with the U.S. 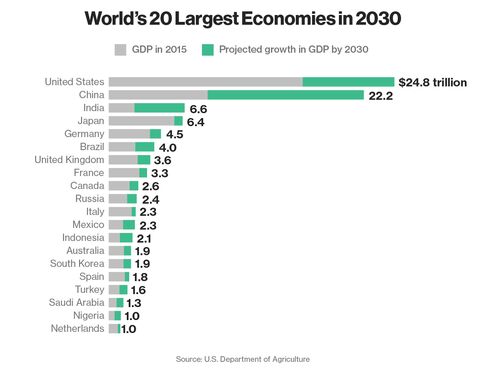 India, ranked eighth for 2015, will climb past Brazil, the United Kingdom, France, Germany and Japan to take third place in the world ranking. The International Monetary Fund calls India "the bright spot in the global landscape." The country will have the largest workforce in the world within the next 15 years, the IMF notes, and among the youngest.

Other nations won't be so lucky, particularly among developed economies. Japan, which was a roaring economy until its asset bubble burst in the early 1990s, has already slogged through decades of stagnation and will likely continue to see very little growth over the next 15 years. That will push Japan down a spot in the rankings by 2030, according to the USDA estimates.

Japan is "an important lesson in how quickly you can downshift your status of what a structure of an economy delivers," said Bruce Kasman, JPMorgan's chief economist.

In the overall ranking, Jamaica will surrender the most ground, bumping down 13 places to 136. Countries with the biggest advances -- like Uganda, which will climb 18 spots to rank 91 -- are concentrated in Africa, Asia and the Middle East.

It's important to take estimates stretching out so far with a note of caution, though.

"There are lots of uncertainties," said Kasman. "Whether China grows at 4 percent or 6 percent matters an awful lot for where it looks like it's going to be in the global economy. Whether India grows at 3 percent or 8 percent -- these are huge differences when you compound them over long periods of time."

The USDA is not the only -- and hardly the most widely-followed -- ranking of global economic growth, though it does offer the advantage of particularly long-term outlooks. The International Monetary Fund's economic outlook only projects out two years. Look out for it later this month.

And if 15 years is too far out for you, take a look at the fastest-growing economies just for this year.

(The graphic in this story has been corrected to reflect the accurate order of the world's 20 largest economies in 2030 according to the USDA's forecasts. The projections show that the 19th-largest economy will be Nigeria and the 20th-largest will be the Netherlands.)