Αρθρα
Refugees deserve action and investment, not indifference and cruelty

The reason for creating a networking culture is obvious once you look at the current [ ... ]

by Ivan Misner   What is business networking anyway? It's more than showing up and shaking hands; it's [ ... ]

Οικονομία
Άλλα άρθρα
In 2015, when more than a million refugees and migrants arrived on European shores, the reaction in many countries quickly turned to tightening border controls and erecting fences. Public opinion became increasingly alarmed, with some irresponsible politicians stoking fears and adding to growing tensions. This was not a rational response; this was denial. Sheltering and supporting people fleeing bombs, bullets, torture and rape is not an act of charity, it is a legal and moral obligation prescribed both by international law and by our common humanity.
To many Europeans, may have seemed a huge number but that overlooks what’s happening elsewhere. Worldwide, more than 60 million people have been displaced by war, persecution or human rights abuses. And the wave of desperate people clinging to boats in their search for sanctuary should have come as no surprise.
Syria is emblematic of a wider trend of conflicts dragging out, unresolved. For five years, a lack of political resolve has allowed the Syria conflict to magnify – and now that refugees are making the long and dangerous journey  to Europe the response has been to label them a problem, find ways of deterring them or turning them back, and to dehumanise them. 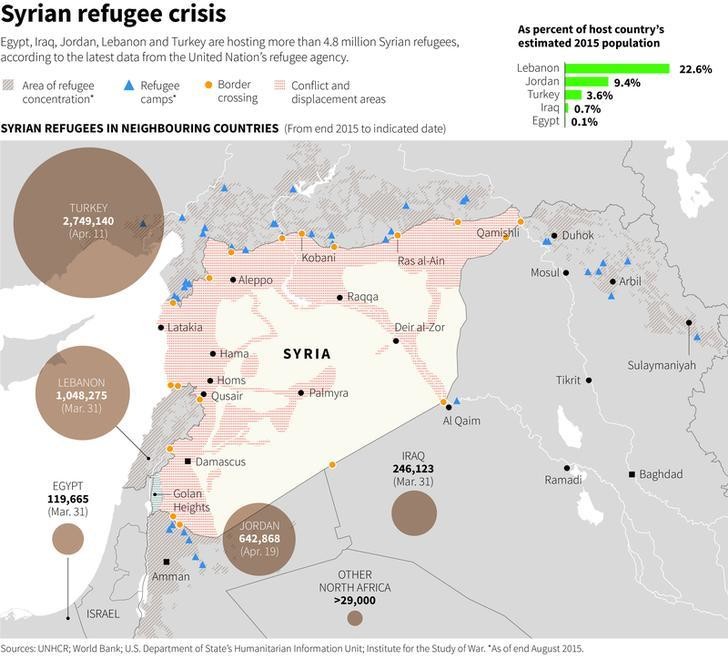 Image: Reuters
Yet it is in the interests of those very governments to make protecting refugees a priority, along with resolving the conflicts that made them flee. Peace, stability and the welfare of the displaced are in the economic, social and security interests of all nations.
Refugees are often lumped together with migrants - people who have left their homes in search of work and a better life. But they are different . Refugees do not travel in search of economic opportunity but to escape war, persecution, death, torture and rape, and because they do not have a home to go to. They are entitled to the protection and assistance of other states under international law, and under shared principles of human decency.
But there are opportunities here as well, not just problems to throw money at. When people think of refugees, certain images come to mind: endless rows of white tents in emergency camps, pop-up clinics and makeshift schools, long lines of people waiting passively to be given food and water. But today, two-thirds of the world’s refugees live in villages, towns and cities. They have skills, ideas and aspirations, so they have the ability, at least in part, to shape their own destiny.
Study after study - from the IMF, the OECD, the World Bank and others - has shown the economic boost refugees can bring with them if they are allowed the chance to improve their circumstances and build a decent life. Refugees can be vulnerable, but also tough, resilient and industrious. When they have the chance to participate in the local economy, both they and their host communities benefit .
Yet refugees are frequently denied the legal status and official documents that would give them freedom of movement, access to the labour market, education and training, and adequate health care. Without these things the cycle of dependency, poverty and vulnerability cannot be broken. It is the task of businesses and trade unions, therefore, to lobby governments and make the case for refugees to be seen as assets instead of burdens. Not only is this a human responsibility, it makes excellent economic sense .
Today’s refugee numbers have grown so big, with a deficit of solutions on offer, that humanitarian aid and longer-term development can no longer exist as parallel systems. At the moment Syria dominates the headlines – and it is true that the war there has forced millions to flee. But Syria is far from being the world's only humanitarian crisis. Over the past few years violence has erupted  or reignited in Europe, Africa, Asia and Latin America, while some of the most protracted conflicts remain unresolved, leaving more people in exile, often for generations . Nearly a million Somalis and 2.5 million Afghans are testament to that.
As a result, the need for humanitarian aid has soared. And while it is true that funding for aid has increased, it is also true that the need vastly outpaces the means. Organizations such as UNHCR are called upon not only for immediate, life-saving aid but also to provide basic services to people trapped in exile. Governments, not aid agencies, have the power to end conflict and the forced displacement that goes with it but this can take years. And you cannot ignore a crisis for years and expect it to go away by itself.
It is high time we collectively work out how to improve the lives of people who can end up living in exile for two decades or more. If we can harness the technical and financial capabilities of governments, businesses and unions and link them with the field presence and long experience of humanitarian agencies, we can create a powerful force for change. At the same time, we must build up the capacity of national organizations who find themselves in the front line during the first phase of an emergency, long before international humanitarian groups arrive. Two thirds of UNHCR’s partners are national non-governmental organizations. Their local presence, expertise and relations within the community are crucial.
Ignoring a crisis and then demonizing its victims when they are forced to move is not a proper approach. It is no easy task to deal with the millions of human beings who are forced to seek help and protection, but it is better to face that task head on, with compassion and with practical solutions. Burying one’s head in the sand won’t solve anything. Allowing people to achieve their potential will.
* Filippo Grandi is a High Commissioner for the refugees, United Nations
source: World Economic Forum